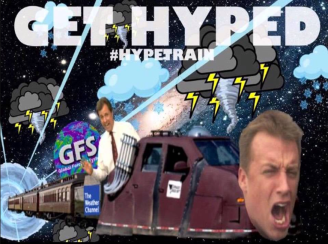 Update on snow totals: Areas east of I-25 are looking at slightly more snow now with accumulations in the 5-10″ range for this storm. Areas west of I-25 and leading up to the foothills will likely see 2-4″ of snow from this storm. The metro area is now under a blizzard warning and strong winds with whiteout conditions will be possible.

Well, the hype train has been in full force with this next weather system as predictions of epic snow have popped up all over the place. Even the famous Frankie MacDonald (I’ve been a big fan for years now) has given his forecast for quite a snow storm for Denver! However, while this storm will be quite powerful, the forecast really doesn’t have much in store for the metro area at this point in time compared to the surrounding areas. In fact, this system looks like a basic spring storm without a whole lot of bells and whistles for the metro area, but we’ll dive into why there has been so much hype and the current forecast a bit ahead. All hype aside, this storm looks to be a good one to bring more moisture to the state and, even though our mountain snowpack is way above average, it’s always better to have too much snow than too little.

As always, I’ll break this up into the following sections to make this a bit easier to read:

This is a fast moving storm system that will impact Denver and the metro area at a time that is rather uncharacteristic of heavier snowfall. Generally with storm events, we see the passage of a cold front in the afternoon and then snow moving in to the area in late afternoon with the most intense snowfall overnight. This storm is a bit different as snowfall currently looks to begin around mid-morning on Wednesday (8-10am) with rain and continue through late evening with the heaviest snowfall occurring between noon and 5-6pm. As mentioned before, this is a fast moving system and will be out of the area quite quickly once the bulk of the snow has fallen. While we may see some flurries late Wednesday, their accumulation will be minimal. 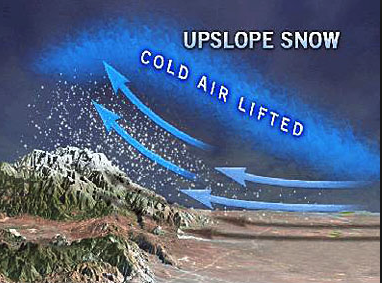 One of the reasons that there has been so much uncertainty and a little hype surrounding this storm is that it’s a classic spring upslope snow storm. As such, the position of the low pressure center on the east side of the Rockies is critical to determining which areas will get high amounts of snowfall and the areas that get a few inches. Low pressure systems have winds that rotate around them in an anti-clockwise fashion, which means that any area to the north of the low will be getting winds from the east and any area to the south will get westerly winds (in the northern hemisphere). So, when a low develops on the east side of the Rockies, it generally ends up flinging winds up the eastern slope causing the development of clouds and snow like in the figure to the right. As you might guess, there is an optimal area for upslope winds and a difference in the position of the low can determine the amount of snow you’re getting.

For this storm, two of the main weather models disagree on the position of the low pressure center. The GFS (right below) has the low slightly to the south and east near the Colorado/Oklahoma border, which puts the front range under the influence of winds from the north that won’t have much of an upslope component. The NAM (left below) has the low more to the northwest, which would give us a bit more moisture from the east and allow for bigger Denver snow. So far, it looks like the NAM is the outlier and that the low will be closed to the GFS’ position, which means that Denver likely won’t be seeing more than a foot of snow, but there is still some time for the forecasts to come in line with each other and for the low to develop in a location with more of an upslope component. 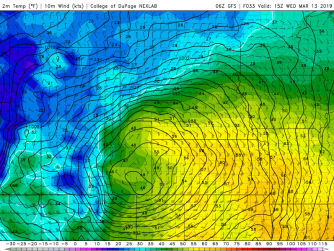 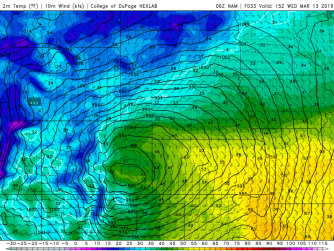 Currently, it’s looking like Denver and the front range will be in a bit of a dead-zone for snow with higher amounts in just about every direction. Currently, it’s looking like areas west of I-25 will get 2-4″ of snowfall and areas to the east of I-25 will get between 5-10″ of snow with locally higher amounts of up to 14″ in some places. The large gradient in snowfall totals is from east to west Denver is primarily due to the storm moving out of the area and causing westerly downslope winds that will reduce precipitation in areas along the foothills. There’s still plenty of time for the forecast to shift, which means that final snowfall totals likely won’t come out until later this afternoon/evening. So check back.

This storm will be relatively warm with temperatures only barely dipping below freezing, which means that it will likely start off as rain and continue as wet/heavy snow. Assuming periods of heavy snow on already wet roads, slushy nonsense will be likely and driving may become problematic. The afternoon commute will probably be even worse and working at home may be a good idea to avoid the chaos. Now, the biggest threat out east is blowing snow in intense winds and this is where the blizzard comes into play. While most areas out east will see anywhere from 6-12″ of snowfall, wind speeds could be as high as 75 mph, which will result in near whiteout conditions and is the reason that blizzard warnings have been issued (blizzards aren’t actually defined by big snow accumulations). Winds will also be blustery in the metro area with speeds in the mid 20s to low 40s. So, avoid travel if at all possible on Wednesday.